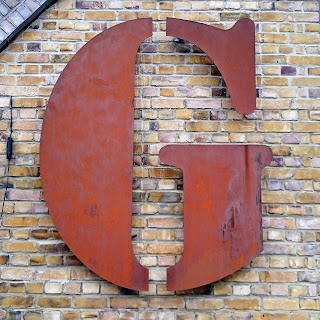 G was going to be for Grammar. But I've said quite a lot about that here (and here), and I'm trying not to go over too much old ground. So, G can be for Genre.

Genre is essentially a way of pigeonholing everything and manages to be simultaneously totally irrelevant and more or less fundamental to the world of writing. You can see why people put so much store in it from the response that always seems to follow you telling anybody you're a writer:


"Oh, really? What kind of thing do you write?"

There you have it.  It's the worst thing anybody can ask you in some ways, but in others it makes perfect sense. Is yours the kind of writing I'm likely to be interested in or not? It's a way of establishing where your books might sit in the bookshop. To some extent, it's a way of establishing who your readers are, although I'm never entirely sure that's a good idea.

I don't know how many people jump around the genres as much as I do when it comes to choosing something to read. I'll pretty much pick up anything, if it seems like it'll be worth my time and effort. So far I can't claim to have ventured into the murky world of, say, dinosaur erotica, but if I met someone who could recommend a title and make it sound compelling I'd probably give it a go. I'd like to think most people don't think of books as being divided into two camps - The Stuff I Know I Like and The Other Stuff - but sometimes I'm not so sure. You do find people who only ever read crime, or break out in hives if they leave the science fiction section of the bookshop. It can't be good to restrict your intake to that extent, but I suppose it limits your chances of being stuck with something you really don't get on with. A bit, at least. Surely it makes life pretty dull, though?

Some journals and magazine use genre as a sort of filter. The idea that modern "literary" fiction is a genre in itself doesn't seem to occur to the editors of these kinds of places. "No genre fiction", they'll cry in their submissions guidelines, with the sniffy assumption that a story with a robot or a monster as a character is automatically excluded from actually being any good. Sure, there's plenty of dross written in the sci-fi and horror realms, but it's no more prevalent there than anywhere else. I mean, some of the stuff that gets published purely because of its "literary" badge should really go and take a good long look at itself in the mirror, for a start.

Personally, I think that while the use of genre has its uses for readers, most writers would be better off ignoring it. Sitting down to write a story in a particular genre immediately saddles you with all sorts of baggage, conventions, clichés, and expectations that will start to shape your story before you've even written the first sentence. Put those aside and concentrate on the character or idea that fascinates you, and don't worry about what pigeonhole it ends up slotting into until after it's written. Because, really, who cares whether it turns out to be a western, a space opera, a historical yarn, or the tale of the forbidden (and anachronistic) love between a caveman and a rebellious young stegosaurus from the wrong side of the tracks? If it's a good story, it's a good story.
Posted by Dan Purdue

I still don't understand what literary fiction is! I write stories - mostly about people, although my 100 worder this week has talking shopping trolleys! If an agent says 'no genre fiction' that would make me think they don't want anything, Perhaps they don't.

Good post, Dan. Over the years I've dipped into all sorts of books and enjoyed phases of stuffing myself silly with certain genres. But whilst my tastes have surely changed and I know what I like, I think it's a bit daft and short-sighted to limit myself and I always try to be open about books before dismissing them out of hand.

Great post, Dan. Genre is the bane of my writing life! I was so keen for my novel not to be pigeon-holed as 'Women's Fiction' just because my main character was female and I am a woman. In the end though, of course it was, because it needed to be put in some category somewhere. So I guess the answer to who cares is... the booksellers! (I also got categorised as 'mystery and suspense' which I'm not sure helped me much because there is a mystery at the heart of the novel but not a thriller/crime-type thing, and I guess that disappointed some people browsing in the mystery genre).

I hope your genre-busting novel is going well. I was telling my agent the other day about this writer I rate who is working on a novel...

(I am reading all your posts. I just don't always get round to commenting!)

Hey Dan, just wanted to let you know I've recommended this series in my new monthly review blog post! :) Don't count on a lot of traffic though... :( It's here for anybody interested - 'The Month That Was... July '16' - http://bit.ly/2baEQOA :)

I seem to have the knack of only ever checking these comments when I don't actually have time to reply, so I'm sorry your responses have hung there unacknowledged for so long.

Liz - I've never heard a good definition of what defines literary fiction. It's complicated further by the fact that "literary" is also sometimes used as an adjective, attached to other genres - for instance, I've read several books described as "literary thrillers".

Susan - That seems like a good mindset to adopt. I try never to dismiss something purely because it's not "the type of thing I read". I'm too concerned about missing out!

Chloe - I've never really understood the concept of "Women's Fiction". That's one of my bugbears with the Bailey's Prize, as it just seems to reinforce the idea that women writers write for women readers. I suppose it's not quite as limiting as "Men's Fiction" (I don't think the phrase "Lad Lit" is used anymore, thankfully), as the proportion of men who read fiction is so much smaller.

At the core, though, I guess the need to shove everything into a pigeonhole comes from a marketing point of view. Salespeople need to have an idea of who they're targeting with a new book, and I suppose the more specific that idea, the better. It's easier to direct adverts and other promotional stuff at "women" or "crime fans" than just the infinitely more nebulous "people who like good books".

Paul - many thanks for the mention. I'm glad you're enjoying the posts!

There are certainly a lot of details like that to take into consideration. That is a great point to bring up. I offer the thoughts above as general inspiration but clearly there are questions like the one you bring up where the most important thing will be working in honest good faith. I don?t know if best practices have emerged around things like that, but I am sure that your job is clearly identified as a fair game. Both boys and girls feel the impact of just a moment?s pleasure, for the rest of their lives.
dinosaur free games

PayCo, Toss Pay, and OnCash may be be} more in style, however PayPal, Skrill, and Neteller all provide a greater likelihood of success. For occasion, Woori Bank works nicely to fund a STICPAY wallet 카지노사이트 which can be utilized for on line casino deposits. Thankfully, the KCSC uses Server Name Identification, enable them to}'t really see the content material of the pages you visit, only the server name. This additionally allows them to dam particular sites on a server somewhat than complete blocks of servers . The good news is that when you expertise a leak when visiting an internet site|a internet site} that has not been blacklisted, no one would be the wiser. Your site visitors - coming and going - should all be redirected by way of an anonymous DNS server.