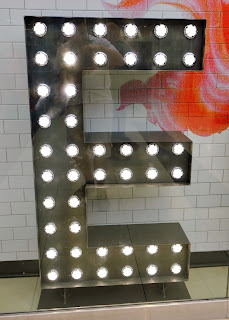 Depending on your point of view, editing is either the worst, most tedious and soul-destroying part of writing, or it's the fun, rewarding bit where the story you actually meant to write rises out of the murky depths of your first draft. Or, I don't know, maybe you don't have a strong opinion either way. Whatever you think though doesn't change the fact that editing is an essential part of the process. What I'm planning to cover in this post is less of a technical guide to editing, but more of a suggestion for the kind of approach it needs, or at least, the type of mindset I find works best.

When I first started writing, the temptation to skip the edit was hard to resist. I would usually have another story idea waiting in the wings, and I'd be desperate to get started on that one, and the sooner I posted the story online the sooner I'd get feedback (this is back in the heady days of the BBC's Get Writing forum, when people seemed to be queueing up to review your work - providing you returned the favour, of course). It was easy to convince myself there was no point in revising a story before I'd found out what other people thought of it.

Once I'd got more confident with my writing I could see what a mistake this was. Often, I'd write something, it would collect a bunch of mostly positive reviews, and I'd think, OK, that's it done with. Most of the time, although I'd be pleased with the response, the story would effectively die there on the screen in front of me. It had served its purpose, by leading the way to those complimentary critiques, that warm fuzzy feeling that comes from people saying nice things about something you've written. And, once that had worn off, it was on to the next idea. Most of the stories I wrote during that phase have never been submitted anywhere, and probably never will.

The change came when I started pushing myself a bit. Writing things that didn't necessarily work in the usual ways, stories that needed an unusual structure or style. The reviews, the ones that counted at least, shifted in tone. They weren't so complimentary. People couldn't see what I was trying to do. I found that frustrating, but it didn't take long to realise they weren't "getting it" because I wasn't sure exactly what "it" was.

Taking time to work out what you've actually written may seem nonsensical - after all, you're the one who wrote it, surely you're going to have the best insight into it. But it's strange how often it doesn't work like that. Time is the important factor here, I think. It's easy to be working so close to something that you can't see its flaws. Step away for a few days - ideally while working on something else - and come back to your story only when you've forgotten as much as possible about it.

It always surprises me, when I pick up a story that's been "resting" a while, how obvious some of the faults have become. Often, when I'm working on the first draft or an initial rewrite, I'll be aware of something not quite working, but it'll be a challenge to put my finger on what that might be. Slot the first draft of another story in-between it and the critical part of my brain, and suddenly it's obvious. It might not be easy to fix, but at least I have a better idea of which area(s) need more work.

I think I've said on here before that a game I try to play with myself is to read a story I'm editing as though it was written by someone I can't stand, and imagine it's just won top prize in a competition I entered (and got nowhere). The task is to 'prove' what a terrible writer they are by pointing out all the reasons the story doesn't work, all the lazy descriptions, all the clichés. All the inconsistencies and typos.

It's amazing how often this works.
Posted by Dan Purdue

Email ThisBlogThis!Share to TwitterShare to FacebookShare to Pinterest
Tagged with: A to Z of Writing, editing, writing

Some useful tips here, Dan. I'm the sort of writer who enjoys editing. I've never tried that last tip before - but I'm going to give it a go!

Thanks, Susan. Different techniques work for different people, of course, but I find it effective to approach my work with a malevolent glint in my eye!

A useful and interesting post, Dan. I would add that if you've read your story, article or whatever and think it's perfect, you probably need to ask a professional editor to take a look (but then I would say that, since that is what I am!).

Many thanks, Julia - for stopping by and for commenting. Welcome to the blog!

It's always good to get a second opinion, and a professional editor will be able to offer a useful perspective on a piece of writing. I'd suggest it's probably overkill to hire an editor for every story you write, but it may be a good idea to get somebody else to take a look if you're sure you've got a great story but it's not getting anywhere in competitions or journal editors keep rejecting it.

Whether any story ever actually reaches "perfection", well - that's another matter entirely!

Hi Dan, found your blog via Sally Jenkins.
I try to keep writing and editing as two separate jobs, and definitely with a break between the two, but I hadn't thought of being a nasty editor. I'll give it a try - just hope she doesn't tear up my next story!

Hi Linda, thanks for visiting and taking the time to comment.

I suppose it's not really about being 'nasty', just a question of developing a very unsentimental and critical eye for when you revisit your work. It's easier said than done, though!