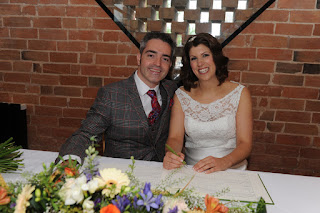 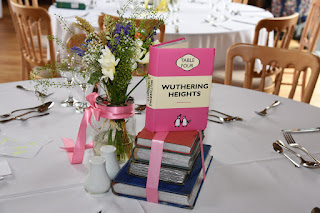 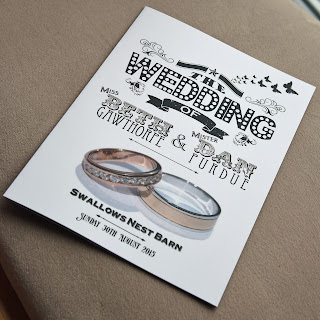 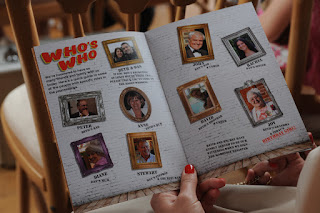 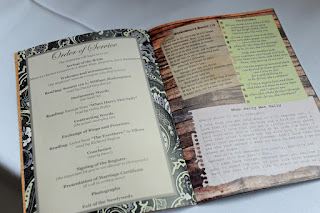 So, that's you up to date. Hopefully my blogging will be a little less erratic from now on, although real life isn't settling down quite as quickly as I thought it might after the wedding.
Posted by Dan Purdue

Congratulations! Your wedding looks amazing and your wife is beautiful! If was getting married again I'd definitely go for a literary theme, but I'm hoping that never has to happen! Bless you two all the days of a long and happy marriage :)

Many thanks, Nik and Chloe!

I hope you never need to get married again, Chloe, but maybe at some point you can renew your vows or celebrate a big anniversary with a literary-themed party. It's funny how having a theme makes things simultaneously much easier and far more complicated. Either way, we wouldn't have changed a thing.

Massive Congratulations on your momentous day Dan - must have been great to hear you've got another story in Writers Forum!

No, seriously. Congratulations on getting married - looks like it was a great day, and all the best for the future together.

Thanks, Ric. You're right - I'll never forget that day when, dressed in my finest suit and with my heart in my mouth, I turned, looked down the aisle and saw that month's edition of the magazine waiting for me there on the newsagent's shelf.

Many thanks for the well-wishes on the marriage stuff, too.

It's good to hear from you. I thought you'd gone very quiet of late, but it seems that for some reason Digestive Press had fallen off my blogroll. I'm not sure why this is, but it's highly unacceptable. I've corrected the omission and will try to catch up as soon as I can. Apologies!

Congratulations Dan, on your marriage and your publication. Your wedding sounds lovely (my daughter is getting married next May so I appreciate the organisation!) Costa Rica is fabulous isn't it?
Keep writing and may more success come your way very soon.

Many thanks, Lindsay. Yes, we were very lucky to have such a wonderful day and a honeymoon that we'll remember forever. I hope all's going well with your daughter's preparations!