Review: 'The Upside-Down Jesus and Other Stories' by Karen Jones

Over the last couple of months I've been trying to tackle a specific region of my to-read pile: books by some of my writing friends. It's one of the perils/joys of getting to know other writers on social media - before you know it, you are swamped with dozens of books you might not otherwise have known about. This is certainly the case with me! But it's a good thing, and as it's always a pleasure to help other writers along, I thought I'd review a few of them here over the next few weeks.

First up was Karen Jones's The Upside-Down Jesus and Other Stories. I 'previewed' this collection back in March 2014 when it was first released (having just written that I'm alarmed it took me nine months to get to it - but then again my pile of unread books is much taller than I am). The book is a collection of 24 of Karen's stories, the majority of which have been published - with a fair few of them having won prizes on their way to publication. There is a mixture of flash and longer stories, with the average being about three pages long. The full book is just under 100 pages. 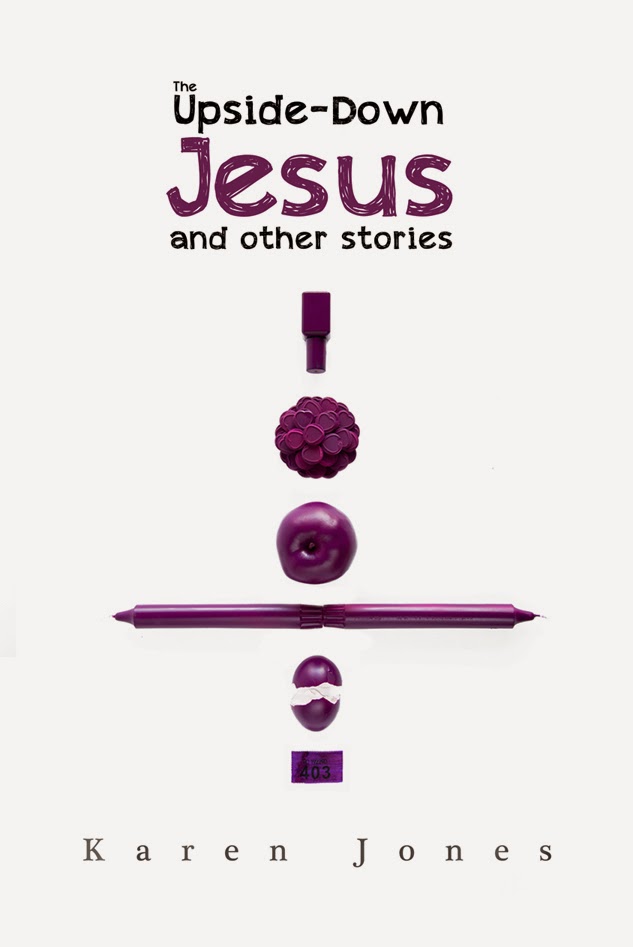 Although they're short, Karen's stories don't tend to be sweet. These are tales in which nobody quite gets what they want - or if they do, it's usually only to find out that the reality can never quite live up to the dream. There's a bittersweet edge to many of the stories here, with a distinctly dark edge to most of the humour. In less capable hands this could easily make for a bleak and, ultimately, unrewarding collection. But what Karen does so well is balance the tone of the stories, so that even in the characters' darkest moments there are still splashes of colour and wit.

In the title story, a young girl overcomes a phobia while a tragedy quietly unfolds around her. In The Resurrection of Andy McPhail, a man's second chance at life gets off to a rocky start when his miraculous recovery turns out to be more of an inconvenience to his friends and neighbours than a cause for celebration. Natural Instincts, one of the stand-out stories in the collection, focuses on a schoolgirl's obsession with the murder of one of her fellow pupils, distorted by her fascination with the sexual experiences of the dead girl.

The collection wraps up with Cowboys and Indians, the story of Grace, a young girl taken to a run-down hotel by her unstable mother, who has left her father. It's a story of outsiders, with the people who work in the hotel all hiding something - loss, regret, or their pasts. Grace possesses a special quality, which the men in the hotel find hard to resist. It's a discomforting read, and one of the best examples of how Karen's light touch can keep you guessing as to exactly what type of story it's going to turn out to be until almost the end.

As with almost all collections, there were a couple of pieces I felt didn't quite pull their weight (these tended to be the shorter stories, with one or two of them feeling a little under-developed), but there is such a good range here it's hard to criticise. I had read the majority of these stories in one form or another before, but to work through them en masse, so to speak, was a pleasure. It made me hope Karen will press on and write a novel, as it would be fascinating to see what she can do with the longer form.

The Upside-Down Jesus and Other Stories is available from Amazon, Waterstones online, and Lulu. Or, your local bookshop should be able to order it in.
Posted by Dan Purdue 1 comment: