Nik Perring's latest book is called Beautiful Words and is the first in a trilogy that will also take in Beautiful Trees and Beautiful Shapes later in the year. It's produced by Roast Books, who also published Nik's story collection Not So Perfect a few years ago, and who very kindly sent me a review copy. 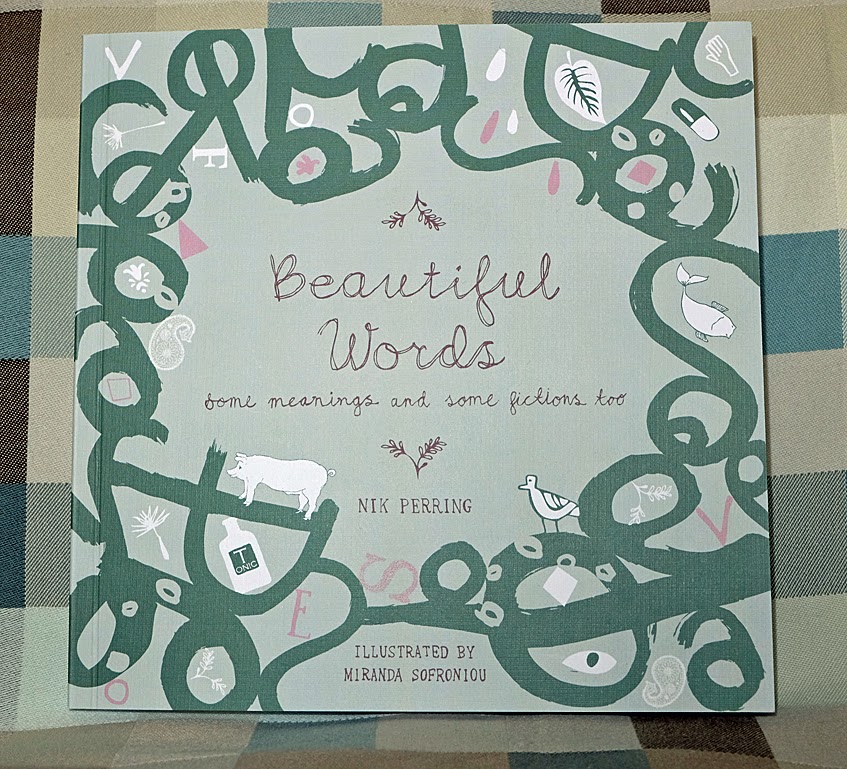 Anyone familiar with Nik's work either through his books or his stories that have appeared online won't be surprised to learn that he again makes a virtue of brevity. What's more of a surprise is that this latest release is a kind of picture book for grown-ups, lavishly illustrated by Miranda Sofroniou. It's an unusual proposition, and initially I found myself wondering exactly who it was targeted at. Having spent a few days now in its company I'm not sure I'm any closer to determining the specific "type" of reader who will enjoy this, but I'll do my best to explain its appeal.

For a start, Beautiful Words is beautifully produced. As per Not So Perfect, it's produced in an unusual square format (although slightly larger than its predecessor, at around 18x18cm), and its sixty-odd pages are printed in full colour. The palette used is gorgeous and reflects the words extremely well. 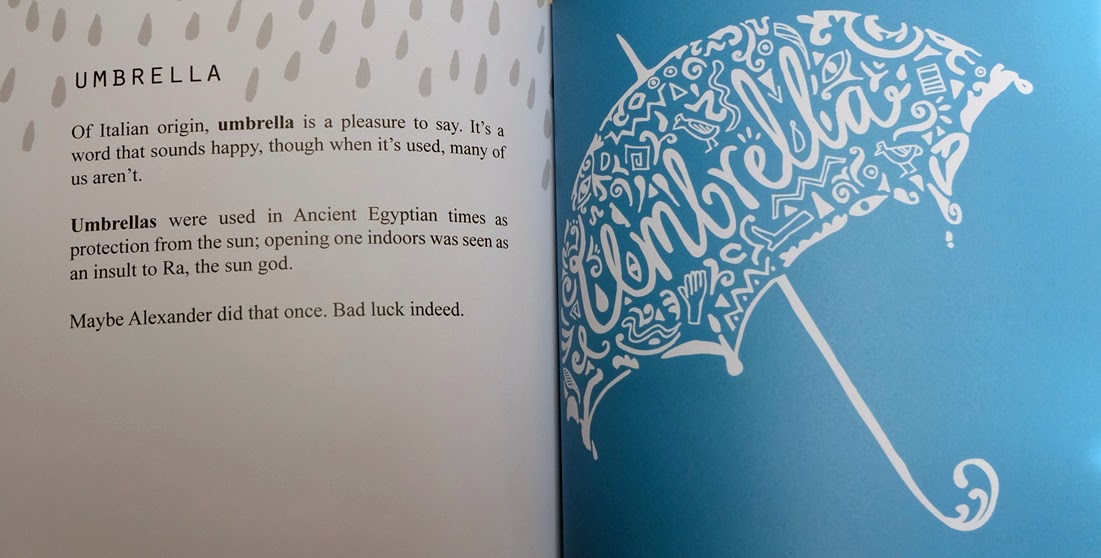 The concept is straightforward: Nik works his way through the alphabet, picking a word for each letter and explaining why that word is beautiful. As he writes in the foreword, "Their beauty might be in their construction, or how they sound, or how it feels to say them...", and it's interesting to walk through the collection he's assembled. Some of the words are simple - Kiss, Nest, Reel - while some are much less familiar - Obcordate and Senescence were both new to me, for instance.

Threading through the words and definitions is the story of Alexander and Lucy, although this is only told in brief snatches. Some of the definitions are told from either Alexander or Lucy's perspective. Sometimes their story is a sentence or two at the end. Sometimes they're not mentioned at all. As a result it's a little nebulous - like glimpsing something through trees or from a moving car - and to me it felt like it more set a mood than told a story. But then, that's one of my main criticisms of flash fiction, and if you're a flash fan I'm sure you have your own ideas of how much of the story should be left to the reader.

Like most of Nik's work, there's an undeniable charm to the writing, yet there's a darker edge lurking in the background (perhaps best summed up by the fact that F's word is Fuck - "beautiful because of its power"). Miranda Sofroniou's illustrations complement the writing perfectly, with just the right amount of what I'd describe as a kind of naive whimsy. The words and pictures make the book a joy to flick through, or study in more detail, however the mood takes you.

In the promotional flyer, the folks at Roast Books describe Beautiful Words as "Flash fiction with a factual twist! An ideal gift for a lover of words." - and I wonder if this might be where the book excels. I can see it being given to avid readers who usually power through novels, offering them an excuse to slow down and contemplate the building blocks of language, the words themselves.

And I also wonder why they went with "a lover of words" when they could have used a beautiful word like logophile? Although maybe that sounds too much like somebody who just really loves chopping wood...


Beautiful Words has an RRP of £14.99, but I spotted it at Hive.co.uk for £8.37, including free delivery to your local independent bookseller. It will be released on 7th April 2014.


"Beautiful Words: Some meanings and some fictions too"
By Nik Perring
Published by Roast Books
64 pages
RRP £14.99
Posted by Dan Purdue

For what I have seen of this, and for what it seems to be, it seems to me to be priced pretty steeply. I liked a lot of 'Not So Perfect', but I am not sure I will stretch to this and your review has not disposed me so to do.

I'd never write a review that was a deliberate attempt to persuade somebody to buy something. I see reviews as a way of imparting information that allows people to come to their own conclusions and decide whether or not they like the sound of something enough to make a purchase. Obviously, you've made your choice and that's fair enough.

The book's a long way from being cheaply produced, and clearly the quality comes at a price. I think it's great that publishers are exploring alternatives to just releasing everything in electronic format as cheaply as possible. But whether enough people will be prepared to shell out up to £45 to own all three volumes to make it an avenue worth persevering with, I guess only time will tell.

Thanks for this, Dan, and thanks, Anon, for your comment. After a quick search I notice that there are a handful of new copies over on Amazon well below the rrp...

You're welcome, Nik. I enjoyed the book and hope it's the start of a successful series for you.

And it's always a good idea to shop around!

Certainly is! And thanks again!

If you have an interesting point of view or a topic that you want to read more about, NoZombo can fulfill your wish. Our goal is to inform you, inspire you, to arm you with suitable weapons, to give you information that you can use daily and in that way fight against the unknown and unforeseen. Just visit NoZombo . Milestones of Success