Those who Shall Remain Nameless 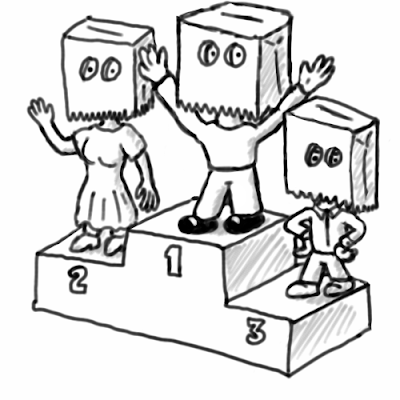 I follow the BBC National Short Story Award with interest every year. There have been some cracking stories that have reached the shortlists and, although I occasionally buy the anthology, I particularly enjoy hearing the stories read on the radio. They're always well produced, and there's something very satisfying about sitting and listening to a half-hour's worth of fiction. This year I didn't get a chance to do much sitting, but the stories kept me company while I painted my dining room.

Much was made of 2013's all-female shortlist (it has, incidentally, never been an all-male shortlist). But while every possible reaction to that was flying around in the media and on Twitter, a much smaller aspect of the story caught my attention - Peter Hobbs (one of the 2013 judges) saying that judges "can choose to read anonymously".

Wait - hold on a minute. This is a competition that requires you submit your manuscript with no identifying marks whatsoever. No name, no email address, nothing to give even the smallest clue as to who might have written it. So what's going on?

Intrigued by this, I asked on Twitter if anybody knew what he might have meant. This led to Susie Maguire and I contacting the competition organisers. We were told the judges were notified of the shortlisted writers, although - if they wanted - they could still read the stories anonymously.

Now, I'm not suggesting the BBC NSSA was judged with anything other than the utmost integrity, and I have no quarrel with the final results (even if neither of my favourite stories won!). However, as a writer struggling to get a toehold on the fiction ladder, I find it troubling that this was an element of the competition that wasn't made clear in the terms and conditions, and I can't help wondering whether this is widespread practice.

What's in a name? Well, obviously it depends on the name. It's fair to say names carry a lot of baggage, most of which is entirely irrelevant when it comes to short stories (or any kind of writing). I've judged a couple of small writing competitions, and in both cases the organisers made sure there was no way I could tell who'd written what. It didn't stop me wondering about the unknown, unseen authors, though. And I don't think I can honestly claim that I wouldn't be influenced at some level if I knew their names. Even unconsciously, knowing who wrote something adds an extra layer to your impression of the work.

I'm not talking about favouritism, or any sort of discrimination. I like to think I've enough integrity not to automatically bump one of my favourite authors to the top of the pile if they just happened to have entered one of the competitions. I'm thinking more subtle than that. Imagine an utterly convincing narrative, written from the point of view of a modern-day teenage girl. I know a person's name isn't a sure-fire indication of their age, but if you were convinced it was written by a young woman, it might just be a good story. If the same story had been written by a man who sounded old enough to be a pensioner, it's not only a good story, but an impressive piece of empathetic writing too. So who is the better writer?

It's irrelevant. The point is, short story competitions should never be about the writer, and what skills they've used to tell the story. All that stuff should be hidden away in the background. It's the wiring under the board, the fishing line up the magician's sleeve. The words on the page are the important bit. A good story is a good story, regardless of who tells it.

I don't know of any writers who would want it any other way. We tie ourselves in knots trying to get our stories right, and when we send them off to be judged, the last thing we want is for their chances to be raised or lowered by our personal fame (or, more likely, lack thereof), our gender, our age, or the social class or background our name suggests. Journals and magazines are a different proposition, and editors might, quite understandably, want to get a feel for a writer's track record before giving him or her space in their publication. Book prizes are different again (although there are several competitions for unpublished novels that are judged anonymously). But short story competitions should be a pure test of writing ability, and the field must be as level as possible. I'd like to think most competitions, large and small, understand this, and work to ensure that, when the prizes are handed out, the individual story is the only thing being rewarded.
Posted by Dan Purdue

Email ThisBlogThis!Share to TwitterShare to FacebookShare to Pinterest
Tagged with: BBC, competitions, names

I agree with everything you've said. I have to say I wasn't keen on the winning story - maybe it was better on the page than listened to, but I found my mind wandering halfway through and I didn't really care what was going to happen in the end.
Still, if we all liked the same things it would be a dull old world!

I'm a big fan of Sarah Hall's writing, and I don't think Mrs Fox was one of her best. I liked the writing more than the story (if that makes sense?). It seemed to have a strong central idea that diverged into a bit of a muddle at the end. I guess there are a number of ways to interpret it, but overall it didn't quite resonate with me the way some of the other stories did.

I think if a competition suggests or implies the entries will be judged anonymously then that should indeed be the case.

This Article truly helpful. Thanks to post such a useful content. welcome go to my site piknu