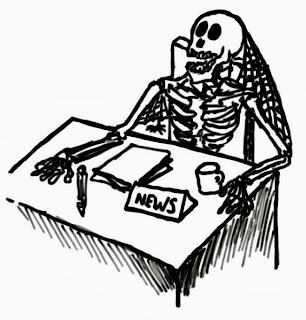 Now, if you'll excuse me, I have some fiction to write.
Posted by Dan Purdue

I've had periods of doing well and periods with no sales and have tried to work out why. There doesn't seem to be much logic to it. The successful stories weren't all written at the same time or under similar conditions, I don't think I subbed them all on a full moon and I wasn't aware they were better than the others.

Hope things improve for you soon.

I've had a very similar year to yours on the competition front, after previously more succesful years, and I know how you feel.
It is a lottery somewhat - especially for those comps with lists of 40/2000+ stories - but it's hard not to feel 'I used to be better than I am now' or 'other people have improved and I haven't' and it can be very demoralising.
However, I'm sure that's not the case with you - and I hope it isn't with me! - so your attitude is the only one worth having. And all our poor ignored stories may well yet find a more in-tune judge who loves them as we do.

Dan, I totally understand how you feel.

But I'm going to get Buddhist on you. (Have I told you I'm a Buddhist now? Yeah, I've been to two classes. I'm totes Budz.)

I won't get into to it here in a big way, but I'm finding that some of the stuff I'm learning about can be applied to the trying to get published thing.

Roughly speaking, and I'm speaking for myself, if I make my happiness dependent on external stuff, whether it's material stuff like money or less tangible stuff like or praise (or specifically to us) getting shortlisted or winning - then I'm making myself vulnerable and open to suffering and doubt and a lack of confidence - because there will always be times when I don't have those things. Lots of times. Maybe all the time.

I don't want to sound preachy in any way, mostly cos it's not like I've got this totally licked myself - but it makes sense to me, and reading your post - I just want to shout out (in a gentle way) - that you shouldn't feel those feelings of 'am I good enough?' because you're lacking (this year) in external reassurance. You are good enough, whatevs. Or something. And I don't want it to kill your creativity.

I feel bad that everyone is saying they know how you feel, but... :) Really dry year for me too. Got to the stage of lying on the floor crying that I was never going to be good enough. But I'm over that now! It's also why I try to blog a bit about other people and literary news - I don't feel qualified to do the advice bit of blogging!

It's a shame writing success doesn't give everyone a turn, isn't it? But I have a hunch that it might favour you again before too long. You're one of my favourite short story writers!

Aw, thank you, everyone. I didn't mean for this to come across as a woe-is-me, everything's ruined, why do I even bother? kind of post. What I hoped to get across is that these fallow periods can ambush anyone, at any time, and the only way to deal with them is to just grit your teeth and get on with it.

I have been very lucky in the past, in terms of competitions, and I think that's meant that I've developed a particular sensitivity to the results of even the ones I don't enter. I follow some very talented writers on Twitter, and it's always a little bittersweet when they post news of a success. Don't get me wrong, I'm very pleased for them; but I do then find myself wondering, "What did they do that I didn't?"

Overall, I've found competitions (and other submissions) very useful as - to borrow Teresa's phrase - external reassurance, and I think they're quite deeply ingrained in my revision process now. But they're not the whole story, and I don't look to them for my happiness.

The wheel of fortune will turn again, and we'll all get our turn sooner or later. The trick is to be ready for when it next comes around, by writing the very best stuff you can.

Good luck to you all!

That's the spirit. I think keeping on is the thing. And using your own judgment as a barometer rather than competition panels. You've had loads of success before so you know you're a good writer. And you're not writing the wrong things, unless you're writing things you don't want to write (if that makes sense).

If you do feel like you're getting in a rut, I've found working on something completely different is really useful - recently I've been working on some illustrated projects and have found that it is making me think about things in a completely new way, having to describe everything that needs to be drawn and considering how it all has to sit on the page has been a whole new challenge and hopefully has improved my other work too. So, maybe, try something different.

Good luck, I'm sure all will be well.