I've read quite a few books recently and I thought I would at least try to post reviews for some of them. I've no idea whether this is useful to anybody, as the reviews category of this blog seems to attract far fewer comments than other topics, but hopefully they at least of moderate interest to some of my readers. Let me know if not, and I'll stop doing them. 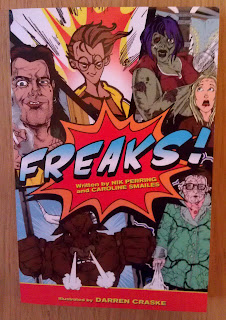 Freaks! by Nik Perring and Caroline Smailes was part of a promotion recently, with various ebooks published by The Friday Project available free of charge. The giveaway's over now, but the ebook version is still available for a very reasonable 99p. I'd recommend getting the paperback, though, as I can't imagine it working quite as well on a screen.

Anyway, seeing this book on the list reminded me that I hadn't read it properly. I'd dipped in to it but I'd had other stuff on the go at the time and I'd put it on the bookshelf for later. Later, it turned out, was a couple of weeks ago.

Freaks! is a collection of very short stories. There are 50 of them in around 130 pages, so it's probably accurate to describe them as flash fiction. The stories are ostensibly united by a theme of superpowers, but in truth they're all about 'otherness', that sense of being different. It's a collection dedicated to "all who, if only for a moment, felt that they didn't belong." Which is pretty much all of us, at some point, right? I was interested in this book because I enjoyed Nik's "Not So Perfect", I'm getting to know Caroline's work, and I've always been intrigued by collaborative writing.

The superpowers in the stories vary. Some are 'real', others are metaphorical or imagined. In keeping with the theme, the stories are illustrated in classic comic book style by Darren Craske, who is an author himself, although not somebody whose work I'm familiar with (I'll aim to address that soon). These illustrations suit the stories perfectly and bring the characters to life by adding another dimension to the often sparse descriptions.

I really enjoyed the book. There are some wildly imaginative scenarios in there, but also some very keenly observed details from universal experiences, or at least ones you can easily relate to. There's a fair bit of sex, and not a lot of it is terribly romantic; in fact many of the stories are quite gritty and deal unflinchingly with the seedier side of life. There's also joy and loss and sadness and longing. One of my favourites was 'Sixteen', one of the longer stories in the book, which conjures up perfectly those awkward teenage dates where you're not at all sure of yourself, and the terrifying possibility occurs to you that the apparently normal things you've been doing for years with your family might seem utterly bizarre to outsiders. Many of the others also triggered that little smile and nod of recognition, which is one of reading's greatest pleasures.

With 50 stories on offer, it would be pretty astonishing if I liked them all. The only criticism I have of some of the stories is a complaint I commonly have with flash fiction - they're just that little bit too slight. Several of these tales seem like a good idea that hasn't been fleshed out, or perhaps an intro for a longer story. There's enough there to get the concept off the ground, and then ... they stop. The first story's called The Photocopier, about a woman who can make identical copies of herself at will, and the it's written from the perspective of the woman's daughter, who may or may not have inherited the same power. There's nothing actually wrong with the story, but I felt it was lacking something because the 'clones' of the woman just seemed to hang around, waiting to see whether her (their?) daughter would be able to do it or not. When the woman multiplied, I thought it might be a metaphor for being a busy mum - that thing of having to be in more than one place at once, needing more than one pair of hands, etc - but they didn't seem to do anything in particular, so I'm not sure what the intention behind her multiplication actually was. I probably missed something.

Another story concerns a boy who finds he has the ability to speak to bees, after accidentally swallowing one. But the story ends without him actually saying a word. Some flash enthusiasts will insist the key to super-short fiction is that the reader has to fill in the gaps, and I'd agree to some extent, but - for me - this kind of gap is too big. It's more like a writing prompt: "Imagine you could talk to insects..." And off you go. I'm left wishing that whichever of the pair wrote it had pushed it just that little bit further.

But these are minor niggles and to be honest there is such a variety of stories here that the odd misfire doesn't detract from the overall fun of the book. The stories are short, sharp, strange, and you never know whether they'll hug you or slap you in the face. Definitely worth a look.
Posted by Dan Purdue

Dan, I enjoyed your cracking review of Freaks! It's a collection full of freaky stories, so no wonder a few of them left you feeling freaked out! I really enjoyed the puzzle book feel of the collection - which I think was suggested by the wonderful dot-to-dot illustration of one of the stories I found particularly affecting - it reminded me of "Activity" books relatives buy for my kids, where some pages have dot-to-dots, some have cross words or mazes, and other have pictures for colouring in. So, your remark about filling in the blanks would fit with that.

Hope you keep reviewing, by the way.

Aha! At least somebody reads my reviews :-)

I like your puzzle-book comment. You've got me wondering whether a novel or a set of short stories could be integrated with a few pages of wordsearches and dot-to-dots. I'm sure somebody's done it already.

There's some really impressive stuff in Freaks!, and there were several characters who could happily carry a novel (if not a whole series). It's one of those books where it really feels like the authors had a good time putting it together.