Wow, three weeks since my last post. Time doesn't hang around, does it?

For most of that time, I've been on holiday, and I've been not writing - or at least, not as much as I planned. The holiday was a week-and-a-half in Guernsey, where my mum and stepdad live. Long-term visitors to this blog will know I try to get over there at least once every year; it really is a fantastic place.


While I was away, in addition to relaxing, doing vaguely touristy things, catching up with my parents, etc. I also planned to write 1,000 words of my novel each day. Ten days, ten thousand words. It seemed a realistic, achievable goal, and one that would result in a significant step forward (this project's really starting to feel like it's taking far too long). Plan B was to work on a short story.

Neither of these things happened. I think I wrote about 2,000 words of the novel in total, maybe 2,500 at a pinch, which isn't great for ten days' worth. I found it hard to concentrate, I struggled to work up the enthusiasm I needed to sit at my laptop, and because the weather was a bit hit-and-miss, it seemed a waste if I was trying to work and it was sunny outside. By the end of the holiday, I was beating myself up for squandering this great opportunity to write.

But, since I've got back, I've realised there's more to writing than just writing. Imagination needs exercise, and it needs rest, too. I'd been busy in all sorts of ways in the month or so before I went away (I'm in the process of moving house, I'm trying to build up my design/engineering business (give me a shout if you need anything designed or engineered!), and for the last few weeks of May I was wrestling with two 5,000-word stories for Bridport, which I only just managed to complete in time). To be honest, I hadn't fully appreciated how in need of a break I was.

So, when I look back on my time away, I realise I did so much more than not writing. I went to museums and learned about things I didn't realise I was interested in. I read a couple of novels. I watched some films. I walked a lot. I played crazy golf. I mucked about with Photoshop: 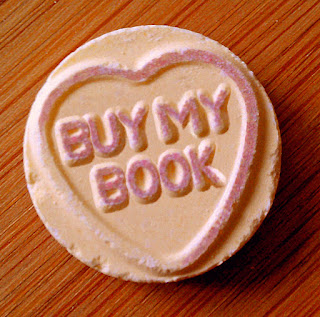 I played in the sand: 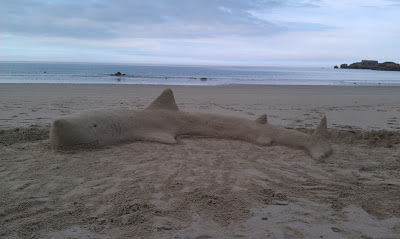 I tried to take photos of the wildlife: 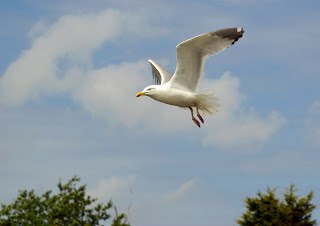 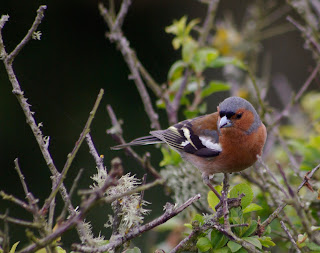 ... in short, I gave myself permission to ignore that (mostly unhelpful) definition of a writer being somebody who writes every day. A doctor is no less a doctor if she takes a day off. A bricklayer doesn't lose all his bricklaying skills following a fortnight in the Algarve. My time off has left me refreshed, re-energised, and generally a whole lot more enthusiastic about knuckling down and making progress on the novel. I've a feeling that wouldn't have been the case if I'd stuck to my original plan.

But enough about me. What do you do to refresh your enthusiasm for writing?
Posted by Dan Purdue

Email ThisBlogThis!Share to TwitterShare to FacebookShare to Pinterest
Tagged with: Guernsey, writing

I decided I'd have finished the first draft of 'thing' before I go on holiday next week. Having failed miserably, I am now telling myself that, since I don't sleep at night anyway, I'll just write about 5,000 words per night because I can sleep in the sun all day.

You're absolutely right. We need to switch off sometimes. Having goals and deadlines is great, but if we don't meet them, we can't beat ourselves up about it.

I think I read this at just the right time. Bring on the sun and Ron Miele and I'll write when I get home.

Hear hear. The creative mind needs to recharge and often I get the best ideas when I'm on holiday, not writing.

Your account of your holiday suddenly made me wish to go on one myself. :)

Thanks for the comments, everyone. I think we can all agree, holidays are excellent.

I think the worst kind of pressure is the self-imposed deadline - though they can be useful in terms of motivation, they're hard to stick to, and missing one can make you feel far worse than if you were just trying to work on something at a more natural pace. I'm going to try to be more realistic with my deadlines, although also avoid being to lenient with myself (so that I actually get stuff done!). It's a difficult balance to strike.