Zeroes and Ones: Somewhere to Start From goes digital

The print copy of Somewhere to Start From, my collection of short stories, has been selling for about eighteen months now. For a self-published book without a much publicity effort behind it, it's achieved modest success. I read in one of the writing magazines that the average self-published book sells about 40 copies, and I've sold around twice that, plus a couple of giveaways, which have been encouragingly popular. 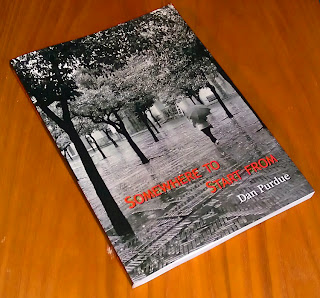 In addition to the paper copy, the book's been available as a PDF download since day one from Lulu.com (although I've now withdrawn this). I think it only ever attracted one download and I felt that now was the time to re-evaluate my digital options.

For the moment, I've chosen to use Smashwords. This is a e-publishing service that's straightforward to use and offers a relatively quick way to get your book in a number of formats and a variety of different e-booksellers, including Barnes & Noble and the Apple bookstore. It doesn't get it onto Amazon, although it does offer the Kindle 'mobi' format.

From what I've been able to ascertain, to really get the most out of Amazon, you really need to enrol in the 'Select' programme, where you make your book available solely through Amazon, and can offer it for free for a few days every few months. The exclusivity aspect of this concerns me; I'm not sure of the wisdom of giving the biggest online bookseller even more control over the 'content' it supplies, even though the promotional benefits of giving a book away are certainly interesting - as Scott Pack's recent example shows.

So, for the moment, I'm a Smashwords author. As well as reformatting the book so it will look OK on e-readers, the 'relaunch' gave me a chance to do something I just didn't have time for when I was putting the print version together - create a properly bespoke cover. For the original, I just followed the usual self-publisher's path of, "Find a decent photo, slap a title on it, job done." I like how the book looks, and I've been pleased when people have complimented it. But it's never been a perfect fit, and it makes for a lousy thumbnail image - the title vanishes and the image is hard to decipher, so it just looks dark and blobby.

For the new edition, I went back to basics. I wanted to reconnect with the concept behind the book - that it was a collection of early works, my first successes, the experiments that turned out okay. The stories represent my first steps as a published author. The word 'evolution' popped into my head. And so, with a Haeckel's chart in one hand and Adobe Photoshop in the other, I came up with this: 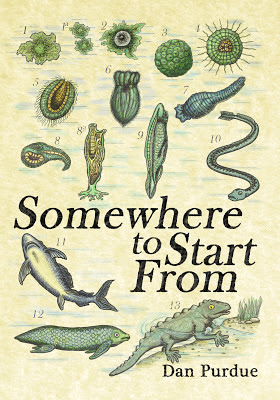 Whether everyone just assumes it's some kind of textbook will remain to be seen. I'm pleased with it; it works as an acknowledgement that I've come on a fair way from the first, wholly unpublishable attempts at prose, long since banished to the dark recesses of my laptop's hard drive, while accepting there's still a long way to go.

It was tempting to make a few changes, and add in a few of the stories I've had published since putting the book together, but I've resisted the urge to mess about with it too much. I thought it ought to fundamentally be the same book. But, as a bonus, I have included "An American Psycho in Wolverhampton", a story that came third in the Wells Festival of Literature short story competition in 2011 and has never been published, so the collection now contains 22 stories.

For the moment, the electronic version of the collection is priced at $1.55, which should be just under £1.

If you like the look of the new version, it's available HERE.

Or, if paper and ink's more your thing, you can still grab a copy of the old version HERE or HERE.
Posted by Dan Purdue

Email ThisBlogThis!Share to TwitterShare to FacebookShare to Pinterest
Tagged with: anthology, ebooks, short stories, Somewhere to Start From

Hey Dan, it looks great! Even if does look like a textbook (and I'm not saying it does), it looks like a darned fun one!

Thanks, Chloe. I'm hoping that next time there'll be somebody to take care of the cover design for me. Still, I do enjoy working with images, so it's been a fun exercise.

Fingers crossed it actually gets a few downloads!

I love the cover design, Dan.

Trouble is that because they're so big and powerful they're the best market and self published authors can't afford to avoid their best market.

Good luck with the new edition, Dan. I'm not even SELF-published yet, so well done!

Thanks, Patsy. I think the thing with Amazon is that by just being on there, a book gets a kind of respectability through that familiarity, and people who aren't writers are happier to buy it than from somewhere like Smashwords, which they'd probably never heard of.

I'm not relying on this book to pay the bills or anything, I just wanted to make the stories more easily accessible. I'll see how far I get with this approach.

Thanks, Lizy. You'll get there, I'm sure!