Review: "The Understanding of Women" by Janina Matthewson

I 'know' Janina Matthewson via Twitter. She always seems to have something interesting and entertaining to say, so when she announced she'd written a novella and released it on Kindle, I thought I'd take a look. 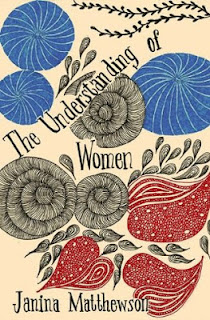 The Understanding of Women straddles the boundary where a long short story starts to become a short novella. I'm not sure of the word count, but it took me an hour or so to read. For me, that's about my limit for reading from my mobile's screen (I don't have an e-reader of any type, so the Kindle app is as close as I get). But it turns out that a little screen actually suits the story pretty well. It's not an epic tale, just a neat, small story with a lot of heart. It's the book equivalent of a fondant fancy (or, if you don't like those, something else compact and sweet and self-contained).

James wakes up at the start of the story, hungover and lying on the floor of a library. As he is taking in and trying to make sense of his surroundings, he realises he is not alone - a girl who might be entirely imaginary has arrived to help him track down his ex-girlfriend, Isobel. This girl is Meg, who might be Meg Baxter, James's first-ever girlfriend, or maybe not. To be on the safe side, he calls her Maybe-Meg.

As well as a tendency to have conversations with imaginary people, James has the gift of being able to understand exactly what people want, regardless of what they say. This has enabled him to have a string of successful but ultimately unfulfilling relationships with girls - until he met Isobel, who remained a complete mystery to him. Now Isobel is gone, and James wants her back.

His quest takes him on a journey around London, tracking down mutual friends and visiting all the places he can think of where Isobel might be. Along the way, he learns more about himself, and in doing so he is forced to start thinking more clearly about what he's actually looking for.

Janina Matthewson writes clearly and she does a good line in understated humour. Her unfussy prose never threatens to get in the way of the story, and as a result the book zips along nicely. I read it in one sitting, but you could equally well break it up into shorter sessions, as it's divided into several sections or mini-chapters. It's a straightforward read, with a linear storyline interspersed with flashbacks to James's formative relationships, and a lot of it is dialogue. I note from her website Janina also writes plays, and you can see that influence here - the characters reveal themselves through what they say, rather than with thick slabs of description. The story ends a little abruptly and the quirky set-up won't appeal to everyone, but I suspect it will win over more people than it turns away.

Overall, The Understanding of Women is a well crafted, charming story, and well worth checking out. Particularly as it's available for less than a pound.

You can buy it from Amazon (UK link, although it's on .com too)
Or, for non-Kindle devices and Kindle owners who don't like Amazon, it's at Smashwords
Janina on Twitter: @J9London
Her website: http://myrednotebook.com/

Email ThisBlogThis!Share to TwitterShare to FacebookShare to Pinterest
Tagged with: ebooks, reviews