A Review and Some Other Stuff 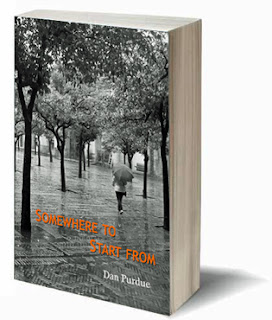 Okay, a very small post from me, mainly to say a huge thanks to Dawn Nelson for giving Somewhere to Start From a fantastic write-up on her blog, dans les points de suture. It's always great when you hear that somebody has bought and enjoyed your work, and about a thousand times better when they feel strongly enough about it enough to tell other people about it. So, please take a look at Dawn's blog and her stories. Flash fiction fans might also like to check out (and join in with) her "Friday Fifties" - fifty word stories inspired by something seen or heard from earlier in the week. Fridays usually work out quite busy for me, but I'm determined to give it a go sooner or later.

Actually, now that I come to think of it, there isn't a lot of "other stuff". I haven't been updating this blog as often as I would like, because I have been focussing on getting a bunch of stories whipped into shape for the end of October, as there are quite a few decent competitions closing then or then-abouts. I have half an eye on the Scott Prize, although I'm not convinced that's entirely realistic. It's a good thing to aim for, at least. I have booked some time off work later in the month to focus on writing, and this feels like an exciting opportunity. I think I'll have to plan my time very carefully and be disciplined about it or it'll fly by and I'll have achieved nothing.

And at some point I'll be posting a review of the Chapter One anthology. Yes, it turned up at the end of August and I've read it and am now processing my thoughts about it. I had hoped to get a response to it up here quite quickly - it would be good to close that particular chapter soon - but after waiting two and a half years to get the book, it's not going to matter if it takes another week or so, is it?


*** Edited to add: If Dawn's review has got you hankering after your very own copy of the anthology, then you might like to check out this offer from Lulu.com. Just use the code below and save 20%. Bargain!

You'll need to be quick, though - the offer ends on Friday 5th October. Click HERE to go shopping.
Posted by Dan Purdue

Email ThisBlogThis!Share to TwitterShare to FacebookShare to Pinterest
Tagged with: blogging, reviews, Somewhere to Start From

Good luck with the writing Dan and fingers crossed for the Scott Prize. Thanks for the links, I look forward to reading your Friday Fifty soon ;o)

Thanks, Dawn. I think I'll need all the luck I can get to even enter the Scott Prize, let alone get any further than that.

And I promise I will do a Friday Fifty (although probably not this week).

Thanks again for the review!