A quick announcement before I start - if you entered Kerry Hudson's "Tony Hogan" prize draw via the post on this blog, the results have now been announced.

Right, on to tonight's main story... As some of you might remember, a fortuitous bit of tweeting a couple of months ago won me an advance copy of crime maestro Mark Billingham's latest book:

Years later, bones came up with the potatoes - casting new light on Granddad's account of the night the German POW disappeared. #rushofblood
— Dan Purdue (@DanPurdue) May 15, 2012

This tiny crime story was among what seemed like a gazillion or so entries for the competition, but it was bone-ridden potatoes that caught Mark's eye, and I was very excited to receive a proof copy of the book a few days later. I was sworn to secrecy regarding the content, but as it's released tomorrow (2nd August), I can finally let you know what I thought of it. 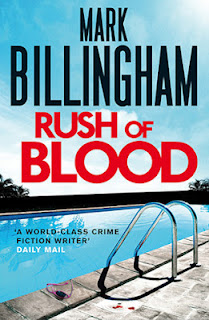 Rush of Blood is Mark's second standalone novel (he's written nine in the popular and terribly good series featuring DI Tom Thorne). For this one, he's spread his wings a bit, moving away (initially, at least) from the London setting of his other books to kick things off in the USA.

The plot centres around three British couples who meet on holiday in sun-drenched Florida. As UK holiday makers tend to do, they hang out together and swap contact details, fully expecting never to hear from each other ever again. However, the last day of their holiday is marred by the disappearance from their resort of a young girl with learning disabilities. The local police interview the couples and decide to let them return home.

Despite, or perhaps because of, the disturbing end to their stay in paradise, the couples exchange emails and end up arranging to meet for the first in a series of increasingly strained and unpleasant dinner parties. As time progresses, and the situation in Florida develops into a murder investigation, the stress of having to confront events that they'd all rather forget about causes tensions to rise and a supporting cast of skeletons to come tumbling out of various closets.

It's an unusual book, in some ways. For a thriller, there's not a huge amount of action - no car chases, no desperate races against time, no fight scenes. Tension is maintained through a gradual drip-feed of detail and the suspense comes from the slow unravelling of the lead characters as they find themselves under the unblinking scrutiny of the law.

The characters are the driving force of the novel and at first they seem thinly drawn (the bolshy builder with a chip on his shoulder, the creepy computer geek, the bubbly housewife, the bohemian actress-wannabe, the Jack-the-Lad salesman, and his timid wife - who may or may not have a penchant for a bit of 'rough play' in the bedroom). However, what Mark does so well is peel back layer after layer of their personalities to reveal some surprising facets, and a plentiful supply of red herrings. None of them turn out to be particularly endearing characters, but they all have enough quirks, failings, and redeeming qualities to lift them above the stereotypes they might initially appear. Other readers may guess whodunnit before the end, but the twists and turns kept me guessing.

I don't read a huge amount of crime fiction, so I don't know if my only real gripe with the book is a common tactic or not. There are sections when the narrative pulls back from its close focus on the individual characters to give a much broader overview of the scene. This doesn't happen often, but it distracted me from the story the way seeing the wires on a magic trick would. There's a scene near the end where the enthusiastic rookie cop working on the UK aspect of the case arrives after the climactic event that ensures the couples won't be arranging any further dinner parties. The scene's written from her point of view, but the characters are referred to as "the suspect" or "the witnesses" - by this point the cop has interviewed all these people and delved into their murky pasts, so she knows them all by name. To me this just seemed like Mark wagging his finger and saying, "Uh-uh, I'm not going to tell you yet; you have to keep reading," and it felt a little unnecessary.

This was a minor concern, though, and on the whole I thoroughly enjoyed the book. Mark evokes the punishing heat of Florida very well, and the scenes with the missing girl's mother are realistic and heartbreakingly poignant. The London-based dinner parties are a hoot, with plenty of bitching, personality clashes, and some very dark humour. Mark's direct, clear prose hustles you along, and 400 pages zip by in no time at all. There's even a cameo from a certain Tom Thorne - although you might not recognise him at first...
Posted by Dan Purdue