I’ve just come back from a week-long Arvon course. To briefly explain, for anybody who hasn't heard of Arvon, it's an organisation set up to promote and encourage writing in all its many forms, mainly in the form of residential courses hosted at one of four centres around the UK. The courses are tutored by published or otherwise established writers working in a relevant field. I don't know whether they're the best courses of this kind – I've now done two different Arvon courses, but no other residential ones to compare them to – but it's hard to see how they could be improved. There's something about the type of people they attract, the tutors who come to share their knowledge and experience (that sounds a bit airy-fairy, but they're very deliberately not there to “teach” anybody “how” to write), and even the centres themselves, that adds up to a kind of synergy, filling everyone involved with boundless enthusiasm for their work.

The course I was on this time was entitled “Starting to Write a Novel”. It took place at the John Osborne Centre, under the guidance of Sarah Salway and Jim Friel. We also had a mid-week visit from Kate Long, who gave us a remarkably generous insight into the planning and research that goes into her books, read us an extract from her latest novel, Before She was Mine, and even passed around a work-in-progress (something I can’t imagine many authors being brave enough to do!) to show how she goes about refining her drafts.

I had an idea of what Sarah was like from her blog and from having read a couple of her stories (I think the first of hers I read was this one from Defenestration (of particular interest to me because they also published one of mine). I’d also read “Something Beginning With...” – her first (I think), unconventionally structured novel (and which is well worth a look). Jim was a bit of an enigma. I’d managed to get hold of one of his books via the excellent Books & Ink in Banbury, but I hadn’t had a chance to read any of it in advance. All I had to go on was the fact he is a lecturer at Liverpool University, and a photo I'd found online, in which he looked rather stern. I half-expected him to be a curmudgeonly, slightly dusty academic type, who would look down on any of us not slaving over some impenetrable work of highbrow fiction. Nothing could have been further from the truth.

Although Jim and Sarah had not taught together before, they are good friends and such warm, funny people it was hard to imagine a better pairing. Both really know what they're talking about, being astonishingly well-read. The writing exercises they set were fun, challenging and really got the creative juices flowing. I came up with at least three viable ideas for short stories, and a whole host of other ‘stuff’ (good lines, neat bits of description, interesting scenes) that I don't have an immediate use for, but might well come in handy later.

The icing on the cake was the group of people I was learning with. Everybody was keen and enthusiastic, regardless of where they were in their own writing ‘journey’ – a couple of us were published, in some form or other; most had a novel started or the beginnings of one in early stages of planning; a few were trying to get back into prose writing after a few years working on other things. The unspoken rule seemed to be that egos were left on the doorstep – nobody tried to dominate the workshops or monopolise the tutors’ time. It’s always daunting signing up for anything that basically means you’ll be stuck with a bunch of strangers for a week with no easy means of escape, but thankfully this was a group that made the whole experience a joy. Incidentally, this was the case with the previous Arvon course I attended, too. I’m not sure how they attract such great people but, whatever it is, I hope they keep doing it.

I set off at the start of the week with the hope that I would come out the other side with a clear idea of what I’d be working on over the coming months. I am closer to that goal, but the main benefit of the course has been the realisation that, actually, it doesn’t matter if I have more than one project on the go at once, and that it possibly wouldn’t suit my general approach to writing to try to fixate on a single idea anyway. I know that keeping more than one plate spinning means I’ll have to work harder at organising my time, but with renewed faith in my work and the determination that 2012 will be a year of real productivity, I feel ready to face the challenge.

Oh, and when it was time to leave, this cat decided it was going to come home with me: 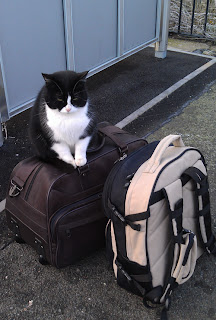 So do you feel more enthusiastic / further along with your novel? Did you start the course with one particular idea / WIP that you wanted to explore? Has the course opened up more novel ideas to you? (Oh, well, I just can't stop interviewing you!)

The cat is lovely. I trust he's coming with us to the Dales.

It was a fantastic week, Tree. And the cat was awesome although he did march off in rather a huff when the train came and I told him I wasn't shelling out for a ticket for him.

The course definitely gave me new ideas although, I think, mainly for short stories. In terms of the longer projects I'm trying to choose between, I have a bit more clarity, but I'm not going to rush into a decision. I've done the 'head' part, in terms of writing out lists of pros & cons for each one, etc. Now it's over to the 'heart' to pick the one that's really crying out to be my Big Project for 2012.