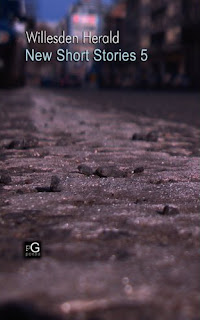 Okay, first things first: I didn’t pay for this anthology. I was lucky enough to win it, my name having been pulled out of a hat over on Jonathan Pinnock’s blog. The book was up for grabs as part of Jonathan’s interview with Stephen Moran – among other things, the organiser of the WillesdenHerald Short Story Competition and editor of this anthology. So I can’t really answer the question of whether it’s worth its asking price (RRP £10), but I’ll try to be as objective as possible.

Starting from the outside in, I’ll just mention the book’s cover. Sure, it’s not the most exciting image you’ll ever see, but there’s an element of it I thought was particularly apt. It shows an extreme close-up of a road or pavement, with the bright lights of town off in the blurry distance. The focus is on a few tiny stones, promoted to monoliths by the photographer’s zoom lens. This, in essence, is the basis of a successful short story – the writer must home in on some small aspect of a life, a relationship, whatever they are presenting to the reader, and make it a thing of consequence. These little black stones are part of the city, the way the look across the breakfast table is part of the marriage, or the fleeting lapse of concentration is part of the disaster.

I read the stories without knowing which had won the prize. It was an interesting game to try to predict which one the judge (Maggie Gee) had chosen, and I was pleased to find out later that one of my ‘top three’ had indeed bagged the prize.

It’s clear that the Willesden Herald takes itself, and its goal of delivering quality fiction, seriously. The writing throughout the book is consistently good, and the themes tackled are weighty, literary ones. Loss, old age, and regret all feature prominently. Death is never far away. It has to be said it can make the process of reading through this collection quite heavy-going at times. I’m not a reader who demands fluffy kittens and butterflies at every turn, but the cumulative effect of hearing about all these dying or dead loved ones did tend to mean I looked more favourably on the stories where the writer used a light touch, and managed to work in a (usually subdued, but credible) note of optimism towards the end. Perhaps the best example of this is the winning entry - Mary O’Shea’s story, “Out of Season”, in which a man with an undefined but terminal illness and his wife take a seaside holiday. Neither of them quite know how to cope, the illness has become a barrier between them, and both the weather and resort are pretty dismal. The story switches viewpoint between the two of them as they start to adjust to their new roles, and in facing up to the future they remember the past that brought them together in the first place. The close of the story is a long way from a Hollywood ending, but Mary leaves her protagonists with a note of hope – an optimistic lift, perfectly delivered.

I also enjoyed (although that’s possibly not quite the right word) Nemone Thomas’s “Dancing with the Flag Man”, an unflinching coming-of-age tale in which a teenage girl learns the dangers of judging people by their appearance. That makes it sound like a fable – which I suppose it is, in a roundabout way – but it comes across as a gritty and absorbing story of broken dreams and lost innocence. I’m in danger of cramming yet more clichés into this review, so I’ll just say it was one of those rare short stories where the characters are so vivid I found myself worrying what was going to happen to them.

The two stories that close the book are particular highlights, too. Angela Sherlock’s “Set Dance” – a story of two brothers vying for the attentions of a pretty girl – and Emma Martin’s “Victor” – in which an anti-abortion protester tries to help a teenager – are both great examples of writers taking their stories in unexpected and rewarding directions. It was also good to see Teresa Stenson’s “Blue Raincoat” again (I’m a member of the same online writing site as Teresa and had a sneak preview a while ago). The shortest story in the book, it’s a poignant study of grief, filled with beautiful poetic language and keen insights into human behaviour.

It’s not a perfect collection. I wasn’t keen on David Frankel’s “The Place” (although I liked the underlying premise), and I’m still undecided about the oddly supernatural “Overnight Miracles” by A. J. Ashworth. A couple of the other stories could easily have been improved by being made a little shorter, a little tighter.

On the whole, though, this is an impressive anthology of writing and a fantastic illustration of the storyteller’s art. The Willesden Herald competition has established itself as a bastion of contemporary literary fiction, and judging by “New Short Stories 5” there’s no reason to think that’ll be changing any time soon.
Posted by Dan Purdue

I can't find any othe way to contact you so I figured I'd just write a comment here...

Your story "Secondplace" is beautifully written! I haven't finished your book yet but that's my favourtie so far, just because it's written so well. Really beautiful. That line, "They'd have the holiday of a lifetime every year." is so poignant. It says everything you need to know about the money-driven cultrue but also about how unfulfilled most money-chasers are. Wonderful.

I was going to tell you that you got the first bit of Counterfeit Confetti wrong because you say that the bride lifted her veil to be kissed after they were pronounced man and wife (whereas it is illegal for the bride to have her veil down for the vows as her face has to be unobscured so the groom can't marry the wrong person!). But as the rest of the wedding was somewhat unconventional, I don't suppose it matters!

I thought there was a button on the profile thing that was a "contact me" type of thing - but that doesn't seem to be the case.

I'm glad you like that story - the original version of that was something I wrote early on, and the first couple of people I showed it to really hated it. Their reaction knocked my confidence for a while, but I stuck with it and kept going back, eventually reaching the point where I felt I could tell the story I'd imagined in the first place. Persistence pays, as they say.

And you're completely right about the veil - d'oh! I guess I thought it was more 'cinematic' for the bride to lift the veil just before the kiss. Maybe that's how they do it in films/adverts?

I'm intrigued by the idea of the groom marrying the wrong woman - do you think that was a common occurrence? (Thinks: Possible idea for short story?)

Thanks for taking the time to let me know how you're getting on with the book. I really appreciate it.

There's a story in Genesis in the bible where Jacob wants to marry his sweetheart Rachel and her dad says he can on condition that he works as a shepherd for him for 7 years first. So Jacob works for 7 years, has a wedding with a veiled bride and then gets to the wedding night and realises he's married Rachel's older sister Leah instead. The father didn't want Rachel marrying first so he sent Leah up the aisle instead! Jacob then has to work for another 7 years so he can marry Rachel as well. Not an ideal situation! (But good fodder for a modern SS equivalent perhaps?)

It was definitely worth you persevering with that story :)

Finished! It's a great collection, Dan. And it makes me realise how much of your work I've read already! I knew a good four or five of those stories.

My favourite is "One Street Corner Too Soon". Beautiful. (I thought Evergreen was well-written too). I'd read Street Corner before online and it's sort of stuck with me. Occasionally I read something - sometiems by a "professional" writer, sometimes just by an amateur who's hit a sweet spot - that haunts me. Just a handful of stories that I can't forget somehow. This has been one of them since I first read it and it was even better than I remembered this time. Getting second person narrative sounding right is so hard. Well done! I hope it's selling well...

Aw, thank you so much, Chloe. Street Corner's probably my favourite out of that lot; it's definitely the one that means the most to me. Again, that was a question of persistence paying off. It was nothing like the story I was trying to tell until in desperation I tried second-person perspective - and it just 'clicked' and came alive. Moments like that are all too rare, unfortunately.

I'm really pleased to hear you liked the anthology.

So, with Jacob, that's 14 years' work in exchange for two wives? Hmm... I'm not sure whether that's a good deal or not. I guess he thought Rachel was worth it, although admittedly it's a bit harsh for poor old Leah.

It was very harsh on Leah! She was the ugly older one that Jacob didn't want to be married to anyway. Though as an interesting twist in the tale for a long time Rachel couldn't have kids, only Leah could. So Rachel lets Jacob sleep with her maid to have a child on her behalf... so Leah lets him sleep with her maid too...

He ends up with 2 wives and 13 children by 4 different women! there's a plot for you...

I can name all of those children. And all of the colours on Joseph's coat.

My sisters and I joke that we have to name all our future kids after them. But trouble is Reuben and Judah and Simeon are OK, Zebulun is kind of cool but Gad? Nobody want's to call a son Gad.

I named my cat Reuben when I was younger, it's a lovely name. Yeah, 'Gad' sounds weird, like an American saying 'God'. Oh my gad. Before Reuben I had a gerbil and I gave him all 13 names. I was a 'Joesph and the Amazing Technicolour Dreamcoat' obsessive for a while there.