Hello. How are you feeling? Calm and relaxed? Good. 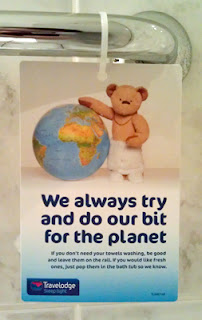 
If that picture’s got you grinding your teeth, welcome to the club. This little tag is, I guess, hanging on every towel rail in every Travelodge in the country. I see it each week (my day job involves working away from home for three days most weeks) and it annoys the hell out of me. It’s probably worth pointing out that I have nothing against the Travelodge itself – the one I stay in is very pleasant indeed. But still, they’ve given me a great example of clumsy grammar to blog about.


Grammar’s one of those subjects that can turn a perfectly convivial discussion about writing instantly frosty. I wasn’t taught grammar in any significant sense when I was at school, but I’ve always had a fascination with the way sentences are constructed, and I suppose I’ve picked up a lot through just keeping my eyes open, and asking questions when there’s something I don’t understand.


However, some people seem to regard it as a kind of puzzle, as difficult to crack as the Enigma Code. They get annoyed by the jargon involved – Oxford commas, semicolons, run-on sentences, clauses and sub clauses, verb agreement, passive and active voices (even when nobody’s talking!). There's resentment at what they appear to regard as an in-joke for the self-appointed elite.


It’s a common spectacle on writing websites for a beginner to post a piece and then lash out at anybody who highlights grammatical lapses in their work. Accusations of snobbishness fly about; the well-meaning reviewers get told that it’s obvious what the writer meant, and that by concentrating on the way they said it, the people giving the feedback are just showing off and being picky, deliberately ignoring the story. The writing’s the important thing, the beginner will protest, not how it’s written.


Thing is, the two are inseparable. It doesn’t matter how great your story is if the reader is lagging behind thinking, “Now, when he said, ‘We went to the zoo and saw a monkey eating a banana and a penguin,’ did he mean the monkey actually ate the penguin, or were those two separate things – the monkey eating the banana, and the penguin, happily minding its own business?”


Mister Sleep, the Travelodge bear, has a different problem. It’s clear what the sign means, but that doesn’t change the fact that it’s badly written. Trying something and doing something are different. They might have the same outcome – the thing gets done – or they might not. The ‘right’ way of phrasing it depends on the intent, and which aspect is more important. Trying to do something is different again. It’s an attempt, an aim, a target. We always try to do our bit for the planet. We may not get it right all the time, but we give it our best shot.


If you try and do something, you’ve done it, end of story – the trying part is redundant. We always do our bit for the planet. That’s a much bolder claim, isn’t it?


Another way to check, if you’re not sure of a phrase, is to experiment with changing the tense. Shifted to past tense, “try and do” becomes “tried and did”: I tried and did my tax return last weekend. See what I mean?


Of course, no rule is unbendable. “Try and do” is a common if lazy turn of phrase in spoken English, and that may be the effect the Travelodge people were going for. Mister Sleep is, of course, a no-nonsense cockney bear with an inappropriate fondness for spending all day in his dressing gown. “Try and do” is probably just the kind of thing he’d say.

When it comes to grammar, I don’t think there’s a substitute for learning the rules (I recommend the Penguin Writers' Manual). Understand those rules, experiment with them, master them. Don’t let them catch you out, but above all make sure your grammar does your bidding. It doesn’t have to be ‘perfect’, because some things just ain’t, but make sure it’s achieving the effect you want. Because what you say and the way you say it are, ultimately, the same thing.
Posted by Dan Purdue

Email ThisBlogThis!Share to TwitterShare to FacebookShare to Pinterest
Tagged with: editing, grammar, writing

Hm. It's an interesting one. That bear should have consulted a proof-reader before he started making such wild claims. I'm all for standardisation in those areas (signs and all that). And I agree that if you're writing to be understood by a wide audience you need to know and be able to manipulate most of the rules of grammar if you're going to communicate effectively.

(Can you tell I'm leading up to a bit where I don't totally agree with you? And also I should say I'm pretty scared of making a grammatical error in this comment.)

It's the spoken English references that I take issue with. I like grammar, and I'm lucky that generally I 'get it' and have the sort of brain that gets it. A lot of our grammar is internal - we're not taught it, we pick it up from being babies - and for some people what you might call 'bad' grammar is probably just connected to where they're from and the variety of English they speak.

I think 'Try and do' is acceptable in speech. I don't think it happens because the speaker is lazy - perhaps they just don't know that particular rule. Perhaps all their friends and the people they communicate with use the same form. It might be standard to them. Until I was 18, I used 'lend' and 'borrow' interchangeably, and felt pretty red-faced when I moved away from the area where that was standard to another where it was looked down on. It wasn't down to laziness, it was just the variety of English that I knew.

Anyway, I could get carried away. I'm into the second year of sitting in on a Linguistics degree programme and it's fascinating. They encourage the idea that there isn't such a thing as 'good' or 'bad' English and as linguists that's probably a necessary place to be in, and it's one I find myself sitting comfortably in as well.

Well... yes and no. I think I probably used "people" in a couple of places here where I should have been more careful to limit it to "writers". Spoken English is very different and I love the richness of variation that crops up as you move from place to place. I'm certainly not advocating any kind of enforced standardisation of the way people speak.

However, although I picked the word 'lazy' mainly because it ties in well with the idea of a stuffed bear lounging about all day in his pyjamas, I still think in some instances the words people use are down to a lack of consideration about what they actually mean. I wouldn't say this was lazy in itself - I mean, you're unlikely to question something you've been hearing all your life until you encounter an alternative. But that alternative had to start somewhere, whether it was a misheard word or confusion about different but closely related words (your lend/borrow example probably slots into this category, as does learn/teach, and my very least favourite, while/until).

I was careful not to use the phrase "bad" grammar (although I did say the sign was badly written, admittedly). From a writer's point of view, it's more a question of how effective it is at achieving what you set out to do.

The towel rail sign just about gets away with it if it's supposed to be the bear talking (although that's a bit cheesy), whereas if it's coming from the corporation directly then I personally see it as sloppy phrasing.

As writers, we need to be fascinated by the uses and "abuses" of language, and to soak up as much of it as we possibly can. Conveying character traits through speech is very effective and one of the easiest ways to build up a picture of them without resorting to too much description or backstory. Having a character say, "Oi, mate, borrow us a fiver, will ya?" can probably replace three or four sentences detailing where he's from and his educational background.

I hope that explains what I was getting at a little more clearly. Like most aspects of writing, it's a case of learning as many of the "rules" as you can, so that you know which ones to break to get what you need from your text.

I agree with you on all the writing stuff, I think the only thing we differ on is the scale of how we feel about errors in speech. I know you're not after standardisation in that area, of course.

It's funny, the things we can hear that us on edge a bit. Like accents - everyone has a couple of accents they love to listen to and feel enamoured by, and a few they don't like, and will possibly make negative judgements about people from. Like you said in your post, we're judged all the time by what we say and how we say it.

I think I sometimes use 'while' when I mean 'until'. I think. If I'm ever in car with you again I'm going to see how many you can stand before you throw me out onto the motorway.

I just nodded. I nodded a lot.