I've had a bizarrely invigorating day today. I got up feeling pretty switched-on, wrote 1000 words of my novel and went swimming (for the first time in well over a year) before lunch. I came home to find (a) a sparrow hawk murdering a wood-pigeon on the driveway - not particularly nice, but kind of majestic nonetheless, and (b) my contributor's copy of Writers' Forum pushed through my letter-box. Oh, and the cheque, which is worth mentioning - a couple of friends had stuff published in WF a couple of years ago, and they had a lot of trouble getting hold of their prize money. It seems like the new organisation over there is really on the ball, though, so I have no hesitation in recommending their monthly competition. Go on, give it a go... 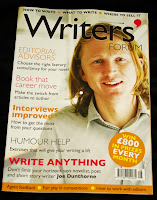 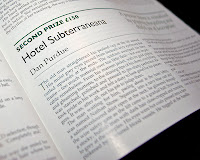 It's been quite a while since I've seen any of my stories in print, and this is the first time anything I've written has made it into something so widely available. It feels fantastic! Although I always get a bit of a rush when I see something of mine in a format other than bog-standard Word, there's something extra-special about seeing it on glossy paper, all laid out in twin columns, with a leader written by somebody from the magazine introducing the story (and saying very nice things about it, too).

As I mentioned earlier, the three winning stories get critiqued by the competition judge, Sue Moorcroft. This bit turned out to be the icing on the cake - Sue says some very encouraging things about the story, mentioning "lively writing", "admirable descriptive passages", and describing parts of the story as "a masterclass on how to make description leap from [my] imagination to that of the reader". I'm strutting like a peacock after all that.

It just goes to show, if you think you've got a decent story, it's worth sticking with it, even if it takes several attempts to get it right - the Writer's Forum competition wasn't my first attempt at getting this story published, but every time it came back I took another look at it, identified which bits worked and which didn't, cut some parts, expanded others, basically honed it little by little until it had developed into a publishable story. Sometimes the distance that a rejection puts between you and a story is exactly what you need to come back to it with a more critical, more discerning eye. Take knock-backs as a positive thing - they're a second chance to reach that little bit higher with your writing.

Writers' Forum is available in most large newsagents, or can be ordered online. Their website is here.
Posted by Dan Purdue

Aces - will be stalking around WH Smith's everyday this week til it's in stock.

What a great day for you even before you saw your contributor's copy. I have had days like that, you think 'Everyday shall be like this!' Next thing you know you're watching cats/shark attacks/wedding dances on youtube...

Hope you'll have a celebration of some kind to mark the occasion of the arrival. Like wetting a baby's head.

I'm thinking I really need to be tougher on myself and do everything I can to stick to that 1000 words-per-day goal - it should be easy, given that at the moment I'm rewriting/restructuring the book, rather than working with a blank page.

Still, easier said than done. I'll try to bear days like last Friday in mind whenever I feel the sudden and urgent need to look up a pop video from 1992. 'Cos it's a slippery slope from that first click to the Lost Afternoon of YouTube.

I noticed you get a mention in the magazine, too (p62, Sally Quilford's column).

Pleasure! Quite a buzz, isn't it?

And thanks for the heads up - didn't know that!