A Documentary About Sharks

I hadn't intended to make this a review blog, but having just finished reading this, and with Nik Perring's call-to-arms ringing in my ears, I decided that I'd make an exception. Just this once, mind. At least until next time...


A Documentary About Sharks
by Gavin Broom 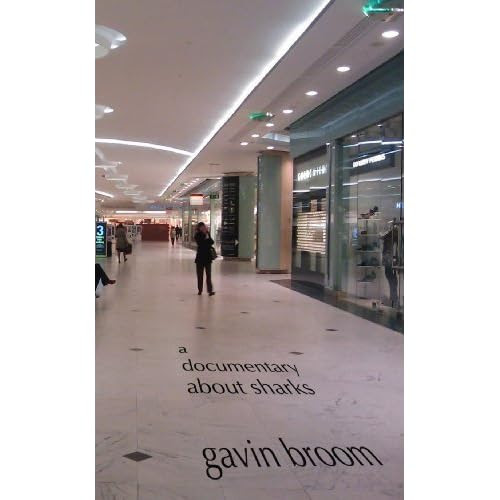 I’ve been enthusiastically following Gavin Broom’s online output for several years, and this collection is a round-up of his stories (and a few poems) that were accepted for publication during 2009. The fact that all the works included here have already been given the green light by editors who know what they’re doing (many from well-established magazines like Jersey Devil Press and Menda City Review) should calm the nerves of anybody imagining this to be an indulgent vanity project.

A Documentary About Sharks, then, is a polished collection of works that serves as a demonstration of Broom’s impressive range. Fifteen stories and three poems fill 90-odd pages, covering such diverse themes as love, loss, and rampaging reanimated corpses. I don’t really feel qualified to comment on the poems, so I’ll just say I enjoyed them, and thought they were worth including. Approximately one-third of the stories were new to me, and re-reading the ones I already knew was like getting a visit from an old friend.

There is common ground in many of the stories – Broom’s characters often inhabit a world tilted beyond their control by events or circumstances. They are isolated, disconnected, struggling to fit the role life has carved out for them. Although this sounds like a recipe for a tediously introspective gloomfest, Broom’s touch is light – he strikes a careful balance between hope and despair, often adding a rich vein of dark humour, so although the stories have their share of poignant moments, they’re never depressing.

I hadn’t read the title story before, in which two disaffected teenagers walk through a shopping mall, planning a Columbine-style massacre. This is a typical example of Broom’s skill – initially seeming like nothing more than two drop-outs hanging around, comparing people in the mall to different kinds of shark, the focus tightens to reveal their sinister motives, before pulling away again on a curiously redemptive note. The effect is unsettling, and it leaves you with plenty to think about.

One reason the writing is so effective is the characterisation. From the jaded commuter in The Boy Who Threw Rocks at Trains (a new one for me, and particularly good), to the unnamed and unnoticed high school girl quietly setting an emotional depth charge for a fellow student in On Your Birthday, Broom has created living, breathing people to populate his stories. The end of a good short story is always a beginning, of sorts, and the reader is left in no doubt that these characters will carry on well beyond the final full stop.

Although the majority of the stories are constructed in a straightforward and traditional way, Broom plays with structure with some of the shorter pieces. The stream-of-consciousness of Between the Lines results in one of the weaker stories, in my opinion, but the style suits the content perfectly. More effective is Everything Binary, a story of a tourist witnessing a murder on the Paris Metro. It’s told in fourteen bite-size ‘chapters’ of fifty words each. The choppy, edgy mood this introduces again complements the story itself brilliantly, and adds an extra level of authenticity that would be hard to achieve with a more conventional narrative.

The standout story, for me, is The Spirit of Shackleton, a master class in short-story writing that makes me jealous every time I read it. Other gems include the gloriously unhinged Poe-infused The Reading of Mr Edgar’s Will, and the book’s closer, a short sting of a piece called Emma’s Verruca.

Whether you buy this collection or simply make the effort to track down a few of Broom’s stories online, your reward will be fiction of a consistently high standard, in the form of unpredictable and intelligent stories that offer insights into the various tangles, pits, and peaks that life can throw at us. Highly recommended.
Posted by Dan Purdue

Email ThisBlogThis!Share to TwitterShare to FacebookShare to Pinterest
Tagged with: reviews, short stories

I must have missed this! Sorry! Thanks for getting involved! I'll be checking this/him out very soon.

Thanks for the gentle kick up the backside, Nick. It's a good idea to raise the profile of short story writers in general - so I'm happy to jump on your bandwagon!

If my review has whetted your appetite, you might like to check this story out - I can't recommended it enough: